“A period recourse into the wilds is not a retreat into secret silent sanctums to escape a wicked world, it is to take breath amid effort to forge a better world.” – Benton MacKaye

This pandemic period has certainly shifted much of life as we know it. In our case, my elementary school aged daughters embarked on virtual learning just as activities such as soccer and gymnastics were being halted. Thus, they were spending much more time on screens–and indoors–than ever before. Yet, unexpectedly our daughters were connecting with one another in ways they hadn’t done in years–mostly positively, but not without any discord. We realized we had been given an unanticipated opportunity–time together. How might we take advantage of this in healthy, safe, and meaningful ways? Inspired by an elder generation in my family who grew up when more time was spent outdoors than in and before screens invaded every aspect of our lives, they incorporated backpacking experiences as part of their family recreation and experiences. My aunt introduced her eventual husband to her family by taking an arduous hike up Standing Indian Mountain. My uncle has been heavily involved in the wellbeing of the Foothills Trail, including hiking some 70 miles of it this year that he turned 70. While the southeastern public lands continue to be encroached upon for the sake of public works projects, resource extraction, development, and more equipment in intensive recreational activities, the forest which remains is ancient, beautiful, wild, and sacred. Why not merge this gift of time with the gift of public lands through a backpacking excursion. In late August, I saw a four day weekend fast approaching and made the pitch to the family for backpacking–and I made an ambitious pitch–“The Southeastern Serpentine Trail,”which is 583 miles of southern Appalachian backcountry mountain trails combining four different trail systems. I suggested we start with just a short 30 or so mile stretch…I was a bit shocked when I didn’t receive any overwhelming opposition among the ranks. We might just pull this off! For the next few weeks my wife Trasie and I ensured we had all the necessary gear considering rapidly growing children. Fortunately, we had taken an overnight hiking trip over the summer, so we were pretty well set.

We decided to start at the beginning. But, on this point-to-point, the beginning depends on the direction of travel. In considering this decision, I noticed on my bookshelf, Hiking the Benton MacKaye Trail by Tim Homan, inherited from my parents who have hung up their backpacking (but not hiking) shoes. Taking this hint, I poured into the book.

To my delight I pleasantly discovered from this book:

1. I knew very little of Benton MacKaye, the person. Among the ranks of legendary naturalists such as John Muir, Rachel Carson, and Aldo Leopold, MacKaye (mac-EYE) was a giant in his own right, advocating for public lands preservation for the sake of their beauty and for the benefit for all of life.

2. How enticing and accessible this trail system might be from our home in Athens, GA; and,

3. Excellent details and descriptions as only a naturalist writer can provide of trail contours that “roller coaster up and over” and “porpoise up and down.” While a bit dated, from my reading I knew I could trust his descriptions nearly biblically, and, in faith, count on “usually reliable” springs and a hard to spot “concrete catch basin” for water sources as we’d had a pretty wet summer.

I picked out what I thought would be feasible for us, sections 1 thru 4, nearly 30 miles–by far our longest distance at one time as a family; coordinated with a friend who lives part-time in Blue Ridge to provide a shuttle; and, just like that, our van loaded up and we were off at about noon Friday, Sept. 4. Destination Springer Mountain Trailhead.

Two hours later, we hit the forest road. Almost instinctively, my daughters Ruby Gene and Zia demanded the windows be lowered, and they stuck their heads out to breath in the cooler mountain fresh air, and practically howled! 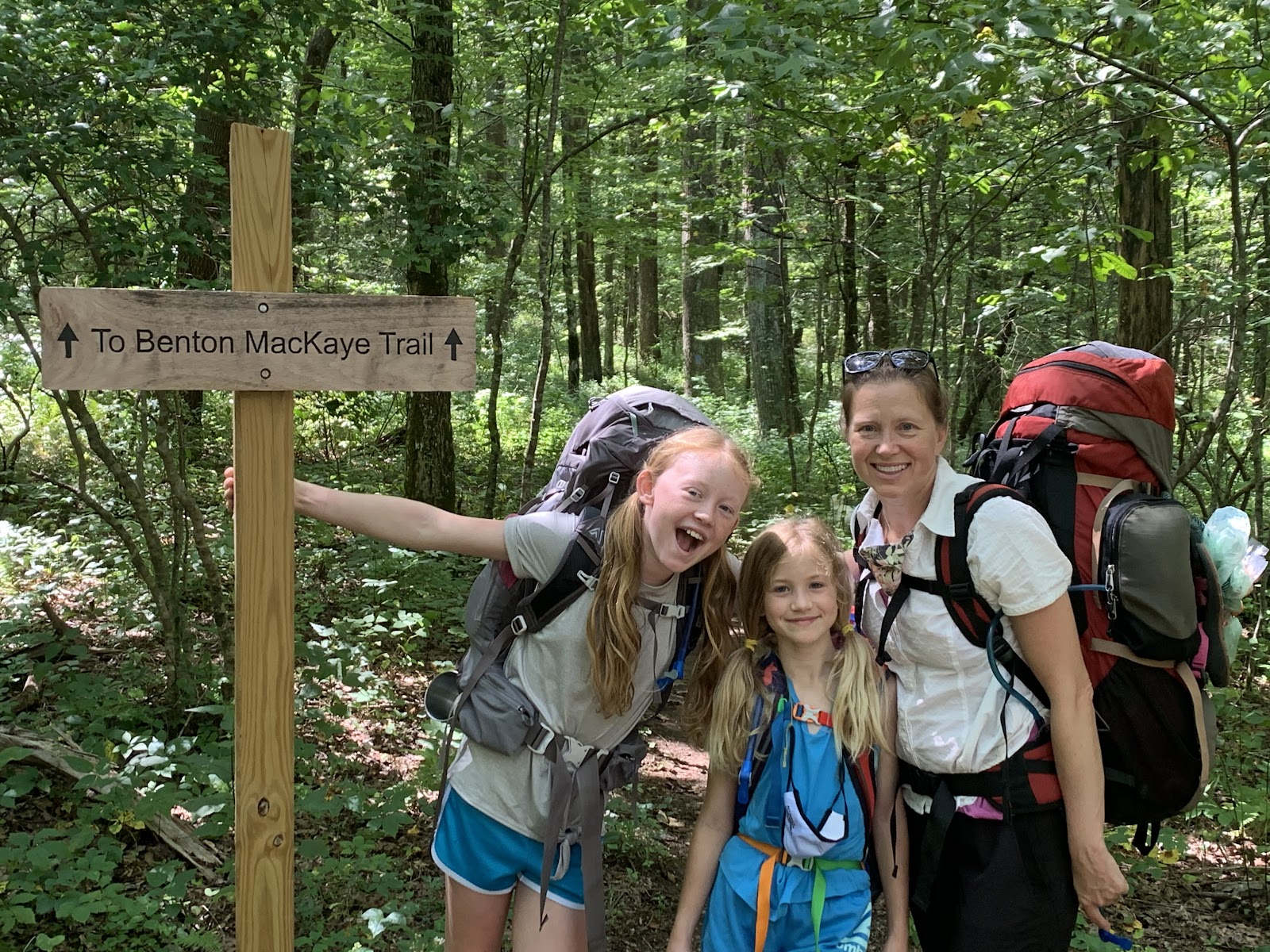 Following GPS, I inadvertently dropped Trasie and the girls off to begin their trek at what ended up being a trailhead just down from the true BMT terminus. Oh well. There were no cars in the parking area, and the trail was majestically inviting. The plan was for them to start along as I went to meet my friend to drop our vehicle at our ending point, Wilscot Gap, and then return to catch up with them at our designated camping area. 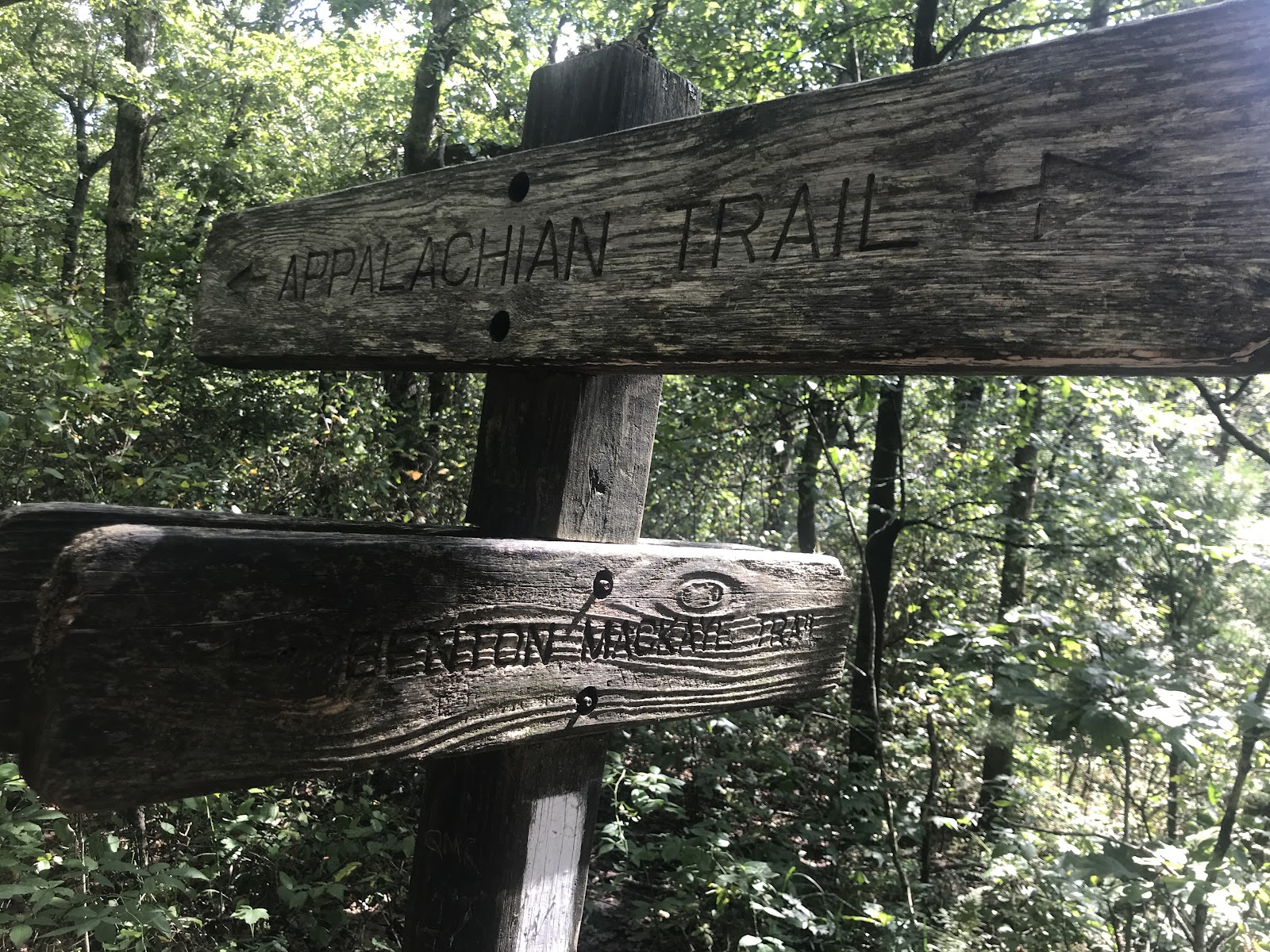 It was as my friend was taking me back to the Springer Trailhead the mistake was realized, but no matter. Out of a sense of trust, perhaps with a hint of negligence and selfish ambition, I had my friend drop me at the Springer Trailhead–this parking area was full!–so that I could begin at the beginning. I hiked as fast as I could muster, but was able to capture a spectacular view from Owens Overlook. It encapsulate the spectacular weather we were lucky enough to have–never too hot, some clouds, but no rain.

Nearly four hours after we separated, I joined Trasie, Ruby Gene, and Zia at the Three Forks campground area where creeks Stever, Chester, and Long merge. Trasie had picked out an idyllic campsite along the Long section. When I arrived, the girls were splashing in the creek.

A great start to a fantastic four days, over which we experienced:

`Our final night on the trail was spent in a gap just down from the highest mountain in this section, Licklog (3470 ft). Secluded behind a thick canopy, we were greeted by a flat place to pitch our tent, and an inviting fire ring. It was around this ring where, after supper, we roasted marshmallows for s’mores, and later, in the glow of the firelight, sang campfire songs, including my eight year old leading us in, “Down by the Bay,” having us go around sharing an unlikely image, and, “Down by the Old Mill Stream,” taught to her by her grandmother. 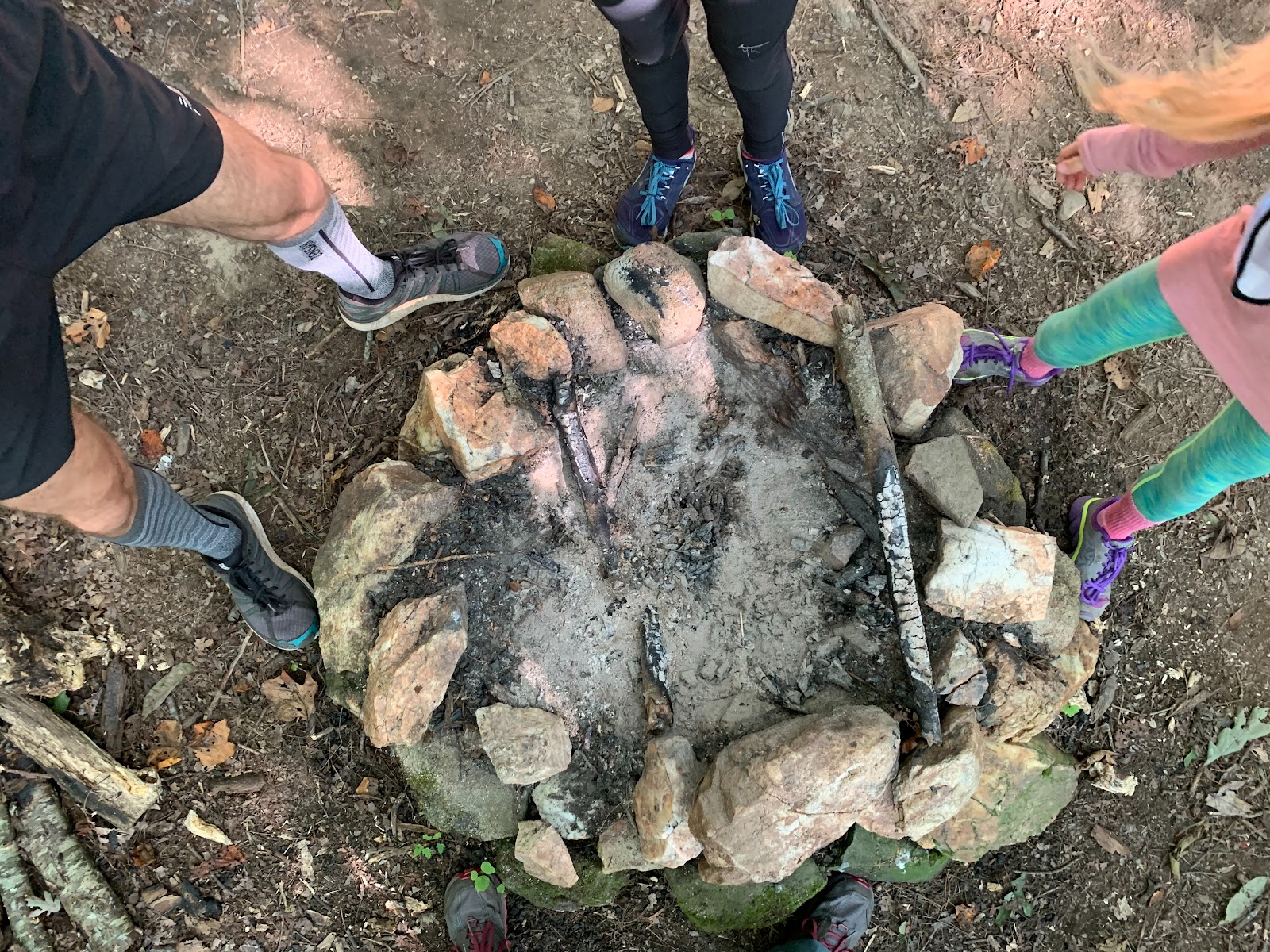 When we descended down from the mountain the next day–after a few more rollercoastering and porpoise-type sections, as well as a tired fall or two–our feet and backs were sore, but our hearts and souls were filled. For me, it was bitter sweet when we reached the vehicle, but I joined the rest in a congratulatory cheer of celebration!

I conclude by sharing, with her permission, what my eldest daughter, Ruby Gene, turned in as a creative writing the following week for her 6th grade English class.   You can find it here.